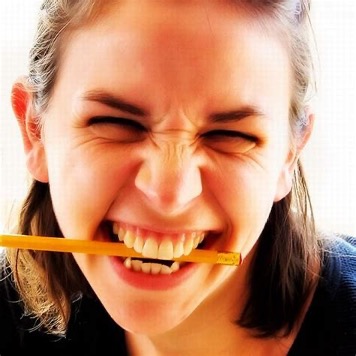 So many of my new patients tell me they ‘clench like crazy’ or grind their teeth like there is no tomorrow. There are several reasons why a person might clench or grind their teeth. Let’s get into a few of them. Some of the more recent research indicates that more than half the time a person will grind/clench in order to help dilate (open) their airway as they sleep. As it turns out, many people in the U.S. have sleep disordered breathing issues and this can lead to sleep apnea where you simply stop breathing at night. When your body senses the problem with the breathing, it stimulates you to grind or clench which helps to open the throat up once again.

Another theory on clenching/grinding is that you are stressed and take out that stress on the teeth. This theory is somewhat controversial I believe. Some doctors say stress is a big factor, others say not really. I have reviewed multiple research papers coming out of ‘Cranio’ magazine and recall one that was quite interesting. Basically it showed that college students would grind their teeth substantially more during final exams. Go figure. So obviously, finals are stressful and the students take out the stress on their teeth. I guess the only solution for this type of problem is called Spring Break.

In my world of TMJ disorders I have met many clenchers/grinders over the years and have found that in most cases the articular discs in the jaw joins are displaced. The slipped disc basically creates an ‘irritation’ situation and the person will grind or clench their teeth to help alleviate the irritation.
Sometimes the clenching/grinding is due to a nervous habit as well. If the person bruxed their teeth during the day it is likely a habitual thing. It’s kind of like chewing gum I guess- they got into the habit a long time ago and it stuck with- talk about a bad habit!

There are likely other reasons why people beat up their teeth, but this list covers the majority of the reasons. It is important that if you are the dentist dealing with this problem that you identify the root cause associated with the clenching/grinding behavior. Let’s say the dentist prescribes an upper nightguard (which ALL of you dear readers already know I do not approve of). And let’s also realize that this patient has sleep apnea that was never diagnosed. So wearing the guard at night opens the airway just a tiny bit and this masks the underlying sleep apnea issues. Then, a few years later, the poor patient ends up with cancer, diabetes, cardiovascular problems, etc. Did that dentist mask over the sleep apnea, unknowingly of course, that lead to the more severe diseases? Let’s also imagine that another patient has TMJ disorder (displaced discs). Wearing that guard masked over the problem and now the patient has DJD (Degenerative Joint Disorder) with cortical bone erosions of the joints. Hmmmm… Did that dentist actually do right or wrong for that patient by masking over the underlying TMJ disorder? I guess that is for the lawyers to sort out- which I believe they will one day when they become more aware of the problems.